THE CURE FOR ALL DISEASE 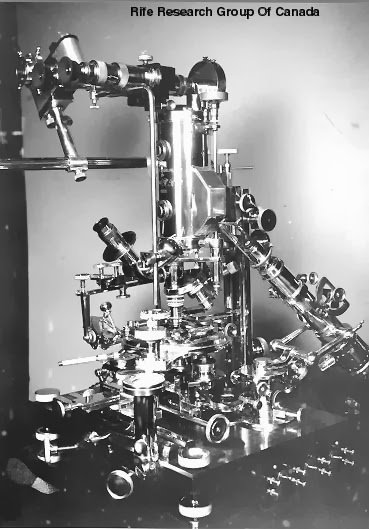 YES, THE HEAD OF THE AMERICAN MEDICAL ASSOCIATION {AMA}, Mr Fishbein,  did announce that they had, just that, many years ago.  There is a long story to this one, but I will summarize for you, and make it short.

In the 1930's to the 1950's Royal Raymond Rife was an Electronic and Medical researcher.  He also created a microscope which initially magnified 31,000 times {31,000X}, than he was able to double that {62,000X}.  This microscope was totally Optical.  In the last few years of his "carere" he was able to get the microscope to magnify over 200,000 times.  With this kind of magnification he was able to see bacteria and virus in its live state, which we can not do with tn Electron Microscope.  After that he started experimenting with different electronic frequencies to kill bacteria and virus.  He used a Square Wave Generator to put out an Electro Magnetic Wave on adjustable frequencies.  He was looking for speciffic frequencies to kill specific bacteria and viruses.  He would have a specific bacteria under the microscope, and bombard it with the Electro Magnetic Wave of a specific frequency.  If that did not kill it, he went to the next frequesy - - and the next - - and the next, until he found a specific frequency which would kill the bacteria.  This he called "The Mortal Oscillatoy Rate {MOR}.  When he found the correct frequency, the bacteria would "explode" and die.  He found the frequency for most diseases and illnesses people would have.

In fact, he took 30 people who had been diagnosed with Stage three Teminal Cancer, and treated them with his "Resonance therapy", he called it.  He cured every one of them - - except 2.  One quit before the program was over, and went back to his doctor.  Well, he died.  Another died after about a week because he was to weak when he started and I do not believe he could handle the Cleansing Trauma of all the dead Cance Cells hitting the bloodstream.

The head of the AMA, Mr Fishbein, heard of this, and came and inspected the work of Mr. Royal Rife.  He liked what he saw, and wanted to be Mr. Rife's business partner.  After Mr. Rife discussed it with Mr. Fisbein, it became obvious that Mr. Fisbein wanted to make the cure so expensive that they would make millions from it.  Well, Mr. Rife turned him down.  Mr. Fishbein got angry and went to the AMA and said the cures Royal Rife had come up with was a fraud.  The AMA strated to drive Mr. Rife out of business.  There was a Seice and Desist Order issued against Mr. Rife and his technology in California.  The government claim Mr. Rife violated the Order, so they came in one day and confiscated all his books, journals, lab reports, and used sledge hammers to smash and destroy all his medical equipment and microscopes.  Luckily, some of it was loaned out at the time, so some of it survived.

A few decades ago a book was written, by Barry Lynes, about the story of Raymond Rife and the CURE FOR ALL DISEASE.  The title of the book is: "The Cancer Cure That Worked, 50 Years Of Supression".  This book is a "Must read" for anyone who is thinking about using this technology for something.

Yes, these generators are available today.  There are many different brands on the market.  The only ones that should be considered are the ones with ALL FREQUENCIES.  That is in the thousands.  Be careful.  There are several Frequency Generators on the market that DO NOT WORK.  Research it very well.  Look for testimonies.  I used to have one.  The one I had was good.  It could knock out a cold in 6 to 12 hours.  as soon as we started, the "flood-gates" in the nose would open.

Do your own research, and suggest to only listen to the ones who have used it.  Good luck in your search.