THE AMERICAN EXTERMINATION OF THE NATIVE AMERICANS 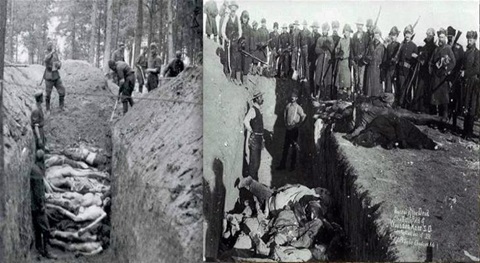 I KNOW THIS IS NOT A POSITIVE POST, but that is why I put it here.  Some times we need a "shock and awe" to wake up to the fact that something is going on.  If we do not learn from history, we are bound to repeat it.  We know - - over a Hundred million Native Amercians were exterminated (North and South America).  I have a question for you:  "Could it happen again ?"  You ask yourself this question at least 3 times, and than think on it.  I do not mean Native Americans this time, I mean - - you.  Before you blow this off, Google:  "Agenda 21" and "Operation Garden Plot".  These are official government policy programs being carried out, right now as you read this.  This explains the plan to get the population of the world down to 800,000,000 by 2025.  You see, the Native Americans were expendable.  The government had no use for them, because they were not controlled very easy and did not make good slaves.  Now, everyone is enslaved, but waking up so they become harder and harder to control.  Besides, at least 50% to 70% of the jobs in the world will be carried out by Robots starting now and completed by 2040 (there is a McDonalds restaurant in Phoenix Arizona where there are just one manager and no employees, because the Robots do the work).  People will be expendable.  That is why you should look at the list of massacres below, so you will know some of the history no one speaks of, and you will not find it in the history books.

Below is a small list of some of the worst mass killing by the American government in Northern America provided by The Indigenous American:

1623 Pamunkey Peace Talks: the English poisoned the wine at the peace talks with Powhatan 250 killed

While some of the modern massacres are terrible, are they really as bad as the genocide experienced by Native Americans?  We cannot forget what happened to them in the name of civilization, colonization, race, and religion. These things need to be taught in schools. We cannot continue to pretend they did not happen and continue to pretend Columbus and his men were heroes.

So educate yourselves and quit doing - - nothing.

Source for the list of exterminations: "Counter Current news".