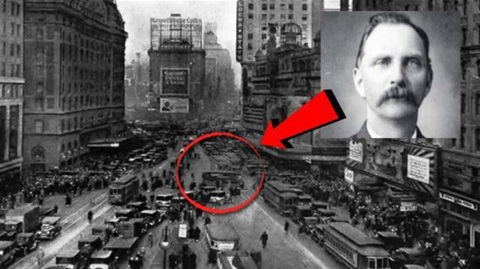 In New York’s bustling Times Square in 1950, a man named Rudolph Fentz was run down and killed by a car after walking into traffic. Not an altogether strange occurrence. Fentz, however, was no ordinary pedestrian and was found to be dressed in 1800’s clothing and with oddly antiquated items about his person. The result of which is that some suspect that he was some time traveler.

The police officers searching Fentz’s body after he was run down found him to have business cards bearing his name and an address on Fifth Avenue, $70 dollars in old banknotes, a letter addressed to the same address dated 1876 from Philadelphia, a copper beer token bearing the name of a saloon and a receipt for the upkeep of a horse and carriage from a livery stable on Lexington Avenue.

Oddly, however, the livery stable could not be found in any address books, and the saloon similarly had never been heard of by anyone in the area either. The address Fentz had on his business cards contained a business, but no-one there had heard of Fentz either.

After the initial findings, the case was turned over to Captain Hubert V. Rihm of the New York Police Department’s missing person squad who found the bank account linked the name of the mystery man. He was told however that the account holder had died five years ago and was survived by his wife. Following the lead, the woman was contacted who told police that her husband’s father shared the same name and had disappeared in 1876 at the age of 29.

The story was thought to have been a work of fiction until recently, with several different versions of the story having been published through the years. A news story dated 1951 however that was seemingly the inspiration behind the other versions has since been found. Rudolph Fentz’s disappearance has also been verified by research.

If the incident was a stunt, seemingly the fact that Fentz appeared confused and was then run over and killed suggests that it didn’t end as he had anticipated.