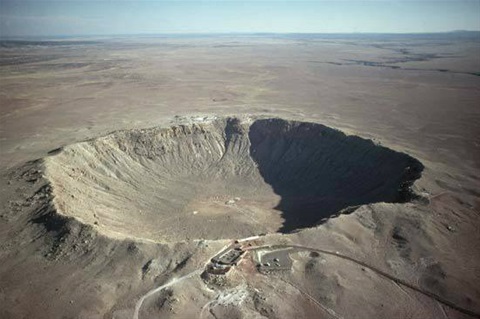 News File: Meteorite Crater, Winslow, Arizona. One of Earth's celebrity astrogeological formations. Ground Zero for an almost 2 megaton blast impact. Impressive as it is in scale so too is it impressive as to how this crater actually formed.

That's not big at all. In fact thats miniscule when compared to the meteoritic behemoths that lurk in our solar system today. A 40m rock caused that hole in the ground.

Previous calculations had the rock slamming into the ground at no less than 34,000 mph (15 km/sec), based in part on the expected speeds of large meteors in relation to Earth. Such an impact ought to have generated more melted rock in and around the crater than what's been found.

A new computer model, reported in the March 10 issue of the journal Nature, shows the incoming object would have slowed considerably during its plunge through the atmosphere, part of it breaking into a pancake-shaped cloud of iron fragments prior to impact.

About half the original 300,000 ton bulk remained intact, smacking the planet at about 26,800 mph (12 km/sec). Like a cosmic rifle bullet, it penetrated through the crust and into the mantle, causing the rocks around the site to shatter and turn over on themselves. The molten mantle rushed to the surface.

While the impact event was too small to cause global environmental effects, its regional damage would have been significant.
Reconstructing the environment at the time of the impact is important to understanding the context of the devastation.
Palynological (fossil pollen) and paleontolgical studies have provided a partial record of the paleoenvironment including the flora (vegetation) and fauna (animals) that lived in the region around50,000 years ago.The current data suggests that a juniper-pinyon woodland or forest covered the gently rolling countryside. Large mammals such as mammoths, large ground sloths, bison, camels, tapirs and horses may have lived in the vicinity and been victims of the 20 to 40 megaton blast.

The damage inflicted by the impact was similar to a nuclear bomb blast, but without ionizing radiation damage. The asteroid, bedrock, and any fauna or flora at ground zero would have been vaporized. Bedrock was ejected and overturned out to a distance of 1-2 km. The explosive shockwave would have produced winds in excess of 1000 km/hr within 3 to 5 km of the impact. These winds would have stripped away grass near the crater and flattened juniper and pinyon trees out to a radial distance of ~14 to 19 km.

Branches, rocks, and other debris was also accelerated by the blast, causing shrapnel-type wounds out to a distance of 10 to 13 km. Vegetation and animals may also have been subject to the thermal emission from the blast, causing burn damage out to a maximum range of ~10km. This intense heat may have started forest fires or range fires, although no fire evidence has been reported.The probable sum of these effects is the destruction of vegetation over an area 800 to 1500 km2. Damage to vegetation would have extended over an additional 200 to 600km2. Animals within 3 to 4 km of the impact site would probably been killed, with maiming injuries extending out to distances of 16 to 24 km. While these effects are severe, they are confined to the immediate region and did not cause extinctions. In fact, the newly formed bowl shaped depression soon filled with water providing a lake habitat for aquatic plants and animals.

This was retrieved from 21st Century: UFO Files on Facebook.